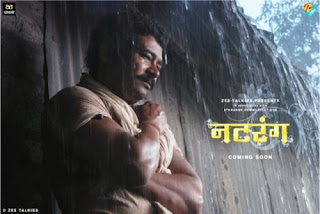 Last Sunday was day booked for movies. First on the slot was Natarang (नटरंग). Natarang was my first Marathi movie and perhaps the second Regional Language movie after the classic Nadiya Ke Paar (नदिया के पार ).
Except for a few words, I don’t understand Marathi, and thus watched the subtitle version. But, I was so engrossed in movie that for the times was feeling the movie and not reading it. May be, as said by Paulo Coelho in The Alchemist, the characters were speaking World’s Unified language.
The best side of the movie was its ability to keep the viewer enthralled throughout. Story line was about a body-builder farmer taking the risk of opening a theatre company, putting all his emotions on stakes; finally dares to take the role of a eunuch-character on stage. For the purpose, the hunk villager, played by Atul Kulkarni, shaved off his thick manly moustaches and had to lose his muscles. He learns the ways a woman walks talks and plays with different gestures. In the course, he gets far and far from his family.
Film’s plot was too genuine and free-flowing. I was all set to doze off for a rare afternoon nap, accessible only on Sundays; but, the movie did not allow me to. All the actors were suiting their characters, and tight direction on a well written script was undoubtedly perceptible. Make-up of the Natarang, Atul Kulkarni, was so good that it reminded me of launda-naach (a rural band performance by opposite-sex clad males in rural UP-Bihar) I saw a few years ago in a friend’s marriage. This is, what I say researching the basics, exploring the roots before diving in to the act of delivering!
On the negative side, I felt the movie ended abruptly. Last few scenes were on a rather fast track, and reminded me of Bunty & Bubly’s theme song, where a lot of things happened in a very small time.
For me, the movie falls in the Must Watch Recommended to Go & Watch category. So, rush and watch the movie.
And, do comment how good you found this review.