May 03, 2010
There are two very important knowledge ingredients in American blood.... first the Right to Speech, and second How to use it? Browse through the mighty internet and get a long, really long list of Conspiracy theories. For the sake of direct and simple station, Wikipedia has also got a List too. Interestingly, most have their origin in America! Being it the New World Order or the popular Kennedy’s assassination or the much widely known Moon Landing and why not the Death of Michael Johnson!
Well, that was just the preamble. The post is about what I observed watching two Hollywood movies, one of which won the Oscars, the other my favour! One of which was on the work done by United States Army Explosive Ordnance Disposal (EOD) in Iraq, other depicting the Iraq Conspiracy Theory....One was the Hurt Locker, other the Green Zone. 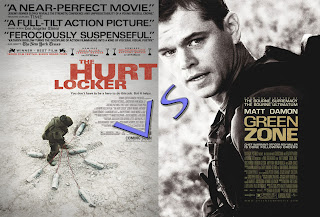 I liked Hurt Locker. It was a movie about an Army team whose work was to dispose the explosives dropped in Iraq and lying there. It portrayed the humane
side of rough-and-tough war soldiers beautifully! Fabulously! The way James connects to a little Iraqi boy "Beckham" and finds him somewhere in cold desert finding the boy’s body surgically implanted with an unexploded bomb, the way he (apparently, for the first time in movie) feels the death and remembers his family; touched my heart. But, though I felt the gooseflesh, I felt the sentiments, emotions; I’m sorry but, what was there in the movie that won so many Oscars? As I found reading comments and reviews all over the Softnet, the movie was seriously highly overrated! Direction, acting, scripts everything flawless, but what issue it actually raised? Kind hearted US men!? Just that!
Green Zone, whereas, is set in the very same Iraqi background; but decisively it tried hitting the probable rationale behind the US’ attack on Iraq! Certainly, no WMD, just the hydrocarbon resources tapped beneath the Iraqi soil. The way Director Paul Greengrass attempted to dramatize the much-talked Conspiracy Theory behind the Iraq invasion, is, for the time being at least, unparallel. I haven’t gone through the Rajiv Chandrasekaran’s Imperial Life in the Emerald City on the life in the Green Zone, Baghdad; but the Green Zone for sure strengthened the understanding I have earned in the due course of time, that there is something fishy certainly cooked on and off the battleground. Whatever, the fact is that some commercial person tried to speak out for the much talked US conspired invasion in to the Iraq. As Greengrass has said that Green Zone reflects a widespread popular mistrust of authority that was engendered by governments that have not told the truth and have let their citizens down over the Iraq war, the movie has a lot to say and yes spoken a lot in a brilliant tone. The plot may have used plenty of fictions, based may be loosely on the unproven facts, but as The New York Times says the movie "seems to epitomize the ability of mainstream commercial cinema to streamline the complexities of the real world without becoming overly simplistic, to fictionalize without falsifying."
Hurt Locker definitely won the Oscars and the Hearts too; but what left an imprint on my mind was the Green Zone, a flop movie depicting a simple saga of the unrevealed truths and lies.
Go watch the movies, if you haven’t; if have already comment and let me know what’s your verdict!