September 05, 2010
“Let the Road be my abode”
I have been trying to write this log for weeks, but for the reason none other than procrastination, I couldn’t. J. So here’s this account of our Trimbakeshwar ride and trek, that we had a few weeks ago.
Well, few weeks back on a fine Sunday we planned a ride to Trimbak. It’s a small town near Nashik, and famous for one of twelve Jyotirlingas Shri Tryambakeśvara (Trambakeshwar). Godavari River, the longest river in peninsular India, originates from Bramhagiri Mountains located near the Trambakeshwar temple. Kusavarta is a kund (well/small pond) which is considered as the origin of the river Godavari symbolically.
Wikipedia says Trimbakeshwar or Trambakeshwar is a religious center having one of the twelve Jyotirlingas. The extraordinary feature of the Jyotirlinga located here is its three faces embodying Lord Brahma, Lord Vishnu and Lord Rudra. Due to excessive use of water, the linga has started to erode. It is said that this erosion symbolizes the eroding nature of human society. A jeweled crown placed over the Gold Mask of Tridev (Brahma Vishnu and Mahesha) covers the Lingas. The crown consists of diamonds, emeralds, and many precious stones and is said to be of Pandavas' time. It is displayed only on Mondays from 4-5 pm.
The Ride:
We started our ride at 7:00 AM, from Ghansoli, Navi Mumbai through the NH-8 via Manor. NH-3 route is a little shorter and straight, but our ride-leader decided for the earlier one especially for the scenic beauty en route.

We were 8-guys, with 5 bikes - an RE-TBTS, there Pulsars (220, 200, and 180) and a Hunk. Ahead was 189 km long road to ride. Rudra was the team-leader, and Abhimanyu was commanding his SLR. Except for a few small stops for chewing-gums our first main stop was Kamath’s Restaurant, Manor. From Manor we took right turn at Ten Naka towards Trimbak, through Wada – Parali   road. This road was the most beautiful ride I have ever had till now.
This section is so beautiful that few pictures shot by Abhimanyu, have been confused with oil-paintings by a number of guys. Serpent road creeping through naked trees standing erect on the red soil with patches of greenery scattered throughout, was giving the area an unforgettable view. Road along the lake was not in good condition, and had a number of highs and lows. With photo shooting all the way along, we took about 4.5 hours to cover the 192 km ride to Trimbak Temple.
We visited the Trambakeshwar Temple, and had light snacks before leaving for the Bramhagiri Mountain trek, which is about 4248 feet above MSL and 1800 feet from Trambakeshwar. 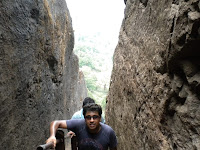 At about 2:30 PM, we started the trek. Bikes were parked and bags were kept at a small shop at the foothill of the mountain. The shop-owner took Rs 5/- each bag. We also took enough bottles of water, Chana (Bengal gram) packets and lemon-candies for the trek, though the water etc is available throughout the route. It’s a very easy trek. Stairs have been carved out of the basalt in a section of trek route to Bramhagiri’s top. I read somewhere online that the Bramhagiri was considered Lord Shiva’s huge form of and thus climbing it was a sin. Lalchand Bhambhani and Ganeshdas built 500 stone steps to reach the top in 1908. The five peaks of this mountain range are considered to be the five mouths of Lord Shiva and are named as Vamdev, Aghora, Tat Purusha, Ishana and Sadyo Jata. The stairway through basalt was quite narrow and steep but equally enthralling part.
It took us about one and a half hour to reach the flat top of Bramhagiri, where on one end there was temple of Godavari and Sri Gorakhnatah Rishi’s Samadhi; and on the other end a cave temple with impressions of Shiva’s jata (hair), which he opened while performing Tandava (divine dance) to release Ganga (Godavari). The impressions were more or less like some weathering marks on hard basalt, but let the myth prevail.... :)

Though there is a proper less-steep way to reach the peak of Bramhagiri Mountain, the route from Shiva temple to peak is more adventurous and need an instinct to trek on four limbs and follow goats’ pathway. From the peak, we had an exotic view of Trimbak town on one side and the valley on another. It’s just awesome.
We started to descend the hill at about 6 PM, and when reached our bikes, to our great surprise we found that our team-leader’s Pulsar 220 was standing there with its key. The guy, who rode that bike from Temple to the foothill, had forgotten the keys. No words to describe that situation, everyone just thanked God that the bike was still there. We also admired the local people for their unmatchable honesty. It might have been a lucky day for us, but the locals were undoubtedly too good and admirable.
It was around 7PM, when we started riding back to Navi Mumbai. A friend needed to go further to Shirdi, so we had to go up to Nashik to get him on board some bus. While getting out of the city, I got strayed and couldn’t meet the group. Our return journey was when the darkness started falling on the awesome NH 3. The highway was too good, especially a section where there were so many turns, that once I had to ask my pillion whether we are advancing or just roaming inside Bhool-bhulaiya (a maze).
When we reached home, it was already midnight; we were all exhausted and all we needed was a bucket full of luke warm salty water to put our foot in to it.

I was indeed seeing another ride ahead…. 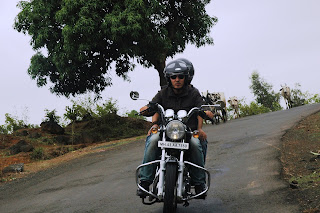