August 22, 2012
Again an event on Saturday and so I won’t again be able to attend. I thought, and to just not let it high on me, didn’t think much. On Friday, I received Vinni’s call, reason was my bad backache. You know, when you don’t honor your grey hair and indulge in fantasies like playing football, you are ought to taste sprains, ligament tear, back pain and a lot many thing. I know I’m missing the issue, but you need to play to understand my feeling…huh…

Whatever, apologizing Vinni, in midst of his pampering, for my inability to attend the #NokiaAppTastingBloggers’ meet; I was caught red-handed.

‘Abe it’s not on Saturday re, it’s on Sunday. Bandra would be far for you kyaa? Last time bhi you couldn’t attend the meet. Aa na is baar.’

I was like, ‘Sunday hai kyaa? Acha, pakka, am coming re’, opening Indiblogger’s #NokiaAppTasting Meet page, going through the schedule etc, I registered before we disconnect.

Next thing I did was to call my bong-colleague, a poet at heart – blogger by choice, Abhishek. He had some prior appointments, but agreed eagerly for the meet. Wines at Taj Land’s End could be a reason, but he would be driving his car – so no drinking! Kela!

I reached out to my AmdavadiTadka Blogger friends, and only BlogwatiG confirmed her presence. Going through the attendees list, I knew I would be meeting many a bloggers whom I know by their social avatars only. A tweet on the excitement, and an old same-hobby friend IndiaBackPackMotorbike replied. I knew he quit his job for his passion, now I would be knowing How?

Anxiety is the best emotion before attempting/attending anything. It lets you discover more and learn a lot. A quick google on Indiblogger meets directed me to BlogwatiG’s post on etiquette. Learnt, thanked :) Next job was learning about #NokiaAppTasting. Through twitter, I could know it was 3rd such meet, but nowhere had I found what the other two were about. Certainly, none blogged about it :/

The day came (it was just a day between my registration and the event, but you know some drama works), I decided about going casual. Abhishek who thought to wear Kurta, finally got confused and turned up in casuals on formal side. Through Mumbai traffic, we reached the Venue well on time.
VikasKhanna and Rajiv Makhni were the hosts. Question was, Rajiv is GadgetGuru, what a Chef would be doing at AppTasting? Anyways, I wanted to meet the Indian Michelin Star Chef, and I know my MasterChef roomie, with no interest in blogging and in blog too, would be envious about it…Ha ha ha (with devil’s laughter tone). He is the one who knows cooking, am the one who knows eating without criticizing :P

Well, as I said we reached the place well on time. Ambience was awesome. Typical Nokia blue was everywhere in the hall and the wine glasses were in just so much harmony. Vinni introduced us to renowned travel-blogger Arti (finally I know she has a face ;), the Magic Eye of Mumbai – Deepak Sir, straight forward Vinita ‘ji’ aka BlogwatiG – I knew her on social network only, the Mumbaiya street-phtographer Firoz Shakir saheb, and IndiBoss Renie. Swapnil, a Marathi movie critic and a tech blogger from Khopoli, was the one I discovered myself. Last was Venkat, the IndiaBackPackMotorbike, with whom we spent quite a good time learning more about his plans to continue his journey.
Minutes later, the Indiblogger team started the event with a big HurrHurrHurr anthem and introduced the Nokia India representatives Poonam Kaul. She too was wearing cool blue and was too sporty. She soon handed over the mike to super-speaker Rajiv Makhni and his co-speaker Vikas Khanna. While Rajiv speaks too good and is damn witty, Vikas has been so shy and sporty as well.
Through the app-tastings on Nokia Lumia/PureView, quiz rounds, audience interactions, prizes-surpises, Wines and Beers, the event went calmly yet livingly ahead. Now I knew why Vikas, a Chef by profession, was so needed to share the stage with a TechGuru. All gyaan would have been rather boring, presence of Vikas made the mood so light and it was already enlightening by the presence of Rajiv. Not only I loved the way Rajiv showcased the apps, but also Vikas conducted the ‘cut the onion’ and ‘tell the ingredients’ test! Fun was when Rajiv joked about Vikas and Vikas took full time to understand and burst out in laughter when everyone else had already stopped laughing! Natural is what I felt about the show, unscripted-is what I liked! 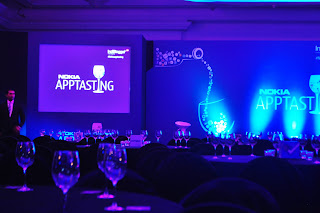 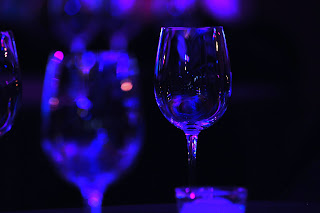 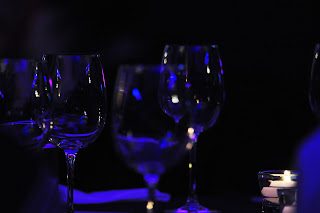 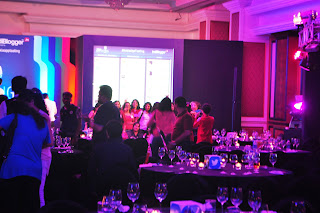 Indibloggers celebrated their Fifth Anniversary with a bang. A huge cake with all the Indi-titles was cut and devoured. Arti also distributed chocolates she brought for the fellow Indibloggers from Japan.
The hospitality was awesome! Be it the drinks, starters or the main course. Loved it!
Hmmm…though it was my first meet vis-à-vis AppTasting, still would like to suggest two things. First, I expected we would be provided with some Nokia gadgets to actually test/taste the apps on it. Guess, it can be done next time. Second, one or two rounds of quiz should have been done via Mobile phone, especially when Indiblogger was able to live stream the twitter feed. What say Rajiv ji?